Main Content
Home » Interviews and Profiles » Crossing the Steppes of Eastern Kazakhstan by Horseback and Walking: Interview with Jamie Bunchuk and Photos by Matt Traver

Crossing the Steppes of Eastern Kazakhstan by Horseback and Walking: Interview with Jamie Bunchuk and Photos by Matt Traver

Two young adventurers from England, Jamie Bunchuk, an award-winning travel journalist, and Matthew Traver, a documentary filmmaker, completed a two-month crossing of the steppes of Eastern Kazakhstan by horseback and walking in the summer of 2013.  They endured many hardships, including searing heat, constant thirst and hunger, ailing horses, and the mind-numbing effect of a flat, monotonous landscape.

* * *
RailRiders: Why did you choose Eastern Kazakhstan for your two-month expedition? And by horseback and foot!
Jamie Bunchuk:  It was part of the One Steppe Ahead expedition, which was a big project that ultimately came to take up most of my early twenties. The idea was a simple one, first thought up on a mountaineering trip to Kyrgyzstan way back in 2010. Basically, Matthew Traver and myself wanted to pay homage to an old Anglo-Irish explorer by the name of Sir Charles Howard-Bury, on the centenary of a journey he’d completed across Central Asia in 1913. This old gent had just decided one day that he would leave the comforts of his Irish castle to head to the remote depths of a sub-section of the Tien Shan Mountains in present-day Kazakhstan. We wanted to replicate some of his route through Kazakhstan and Uzbekistan, as well as a project of our own in Tajikistan.
RR: Can you paint a picture of Eastern Kazakhstan? Barren? Wind-swept? Mountainous?
JB: l likened travelling in the Kazakhstan to passing through a series of paintings. You could wake up in the morning, pack all your things away, ride for over six hours straight in a straight line and then still see where you had set off from that very morning. The steppe is so utterly flat that one remains in the same perspective, with the same horizons and with the same mountains in the distance, for hours, even days at a time. There was something also about the dried grass, a subtle hint of salt in the air and the endless flat vistas stretching out on all sides that really reminded me of the ocean. I kept convincing myself that over the next rise of the horizon I would see the sea. Of course I never did, we were about as far away from the ocean as it's possible to be in Asia.
RR: Describe the horses. Where did you get them? And how much did they cost?  How did they hold up?
JB: Unlike neighboring Kyrgyzstan and Mongolia, in Kazakhstan horses are primarily raised for their meat and milk and, as such, securing suitable riding steeds is not only a hard but also very expensive affair. The three horses we ended up buying were not of the highest standard but they got us through the journey, which is all we could have asked of them! Their names were Charlie, Totoro and Arman. We bought two of them in an old collective farm and one the last one, Totoro, off a one-eyed farmer, which is a coincidence as it turned out to be a one-eyed horse as well. The asking price was $1,800   per horse; all my life meager’s life savings.
RR: How did the horse hold up?
JB: We did have problems with the horses over such a huge distance, with Arman suffering a saddle sore that became infected and unfortunately turned into an abscess. You try to do everything in your power to keep your horses safe and well, but on expedition mistakes are made regardless, and new solutions often cause new problems too. It’s a big balancing act between action and responsibility and – at my lowest ebbs – I found it a very heavy moral burden to bear. Towards the end of the expedition we spent most of our time marching across the steppe rather than risk their health further.

RR: How did each of you hold up over two months?
JB: We held ourselves together, just. It was an incredibly hard two months for us, especially towards the end of the journey when we were walking up to 20 miles a day in the searing heat. We couldn't carry that much food with us, as weight was a constant issue with our horses, so as a result we didn't eat very much. Gruel for breakfast, followed by one small packet of instant noodles, dry, for the lunch, and then two packets of the same for dinner. At points we must have been surviving on less than 800 calories a day. On top of that, there were several instances when we managed to contaminate our rations with petrol, leaking out from our pressure stove in the packbags. Eating gasoline-soaked biscuits because we had nothing else is a memory I'd soon rather forget!
RR: What was the most difficult part of the crossing?
JB: Without a doubt, walking in the heat was the hardest part of the expedition. At its peak it was around 45°C, and trying to do anything in those temperatures was energy sapping in extreme.
RR: Did you ever run out of water?
JB: We never ran out of water but we came very close on a number of occasions. The worst experience we had was actually towards the start of the trip when we were up on a high plateau. We crossed a space of around 60 miles that only contained salty water and we only found that out once we up there. It wasn't as bad as seawater, but the salt did very little to parch our thirst, and we spent a lot of time longing for a fresh drink; it took us three days to cross this section and it wasn't particularly pleasant.

RR: What did the locals think of your expedition?
JB: I believe they were impressed, although it was hard to tell with the White Russians. Cars were always stopping and people getting out to greet us and ask us who we were and what we were doing in such a remote part of the country; we must have been the only westerners they had ever seen travelling down these back roads on horseback. The only drawback was the amount of vodka we had to drink at times, often during the middle of the day from kindly strangers who absolutely insisted we had to have a drop -- and then the rest of the bottle -- with them.
RR: Were you ever invited into their homes?
JB: We were invited into a local's home I believe around three times over the course of two months; the rest of the journey was spent sleeping in our floorless tent. I think we could have been invited more times. Kazakh people are incredibly friendly and generous. But we made a deliberate effort to stay away from towns and civilization as much as possible, as we were worried for the security of our horses. The last thing we wanted was to pop round someone's house for a cup of tea only to come back out and find our trusty friends had been stolen.
RR: Can you describe the lifestyle of the Kazakh people? The comic image of Borat seems to come to mind.
JB: It's funny, but Borat is about as far away from the real Kazakhstan as it's possible to be. The people in that film don't look anything like Kazakhs and their mannerisms are also completely different too. Kazakhstan is actually a very affluent country and urban centers like Almaty and Astana are very stylish, almost Parisian in feel. Further away in rural areas, things become a bit quieter and it’s a more simple way of life but still, it’s probably not a million miles away from how the farming communities of the American Midwest used to operate several decades ago. I guess the difference that's most observable is the collectivist attitude to society and family, as opposed to our more individualistic outlook here in the West.
RR: What influence, if any, did you notice of the former Soviet Union or currently of Russia here?
JB: The Soviet way of life is very strong in Kazakhstan, as is the influence of Russia and Russian culture. At its worst, this meant an absolute love for bureaucracy and paperwork, but I do really love the Russian sardonic attitude to life and I think a lot of good bits about their culture have rubbed off in Kazakhstan too, such as their ‘anything can be fixed no matter how broken’ attitude. We got by in Kazakhstan only speaking Russian with no difficulties whatsoever,
RR: What happened to your horses when you finished?
JB: We spent around five days camped out behind a petrol station on the motorway outskirts of Almaty before we could sell them. In the end, with the help of friend of a friend, who rang up pretty much everyone in Almaty connected with horses, we found a company who was willing to buy the animals, but only for half the price that we had originally bought them for. Being an established and affluent horse-dealership, with a wide network of connections and the transport to potentially get the animals out to rural areas, I sincerely hope the genuine fellows we met sold our horses out to farms where they could be put to good use. 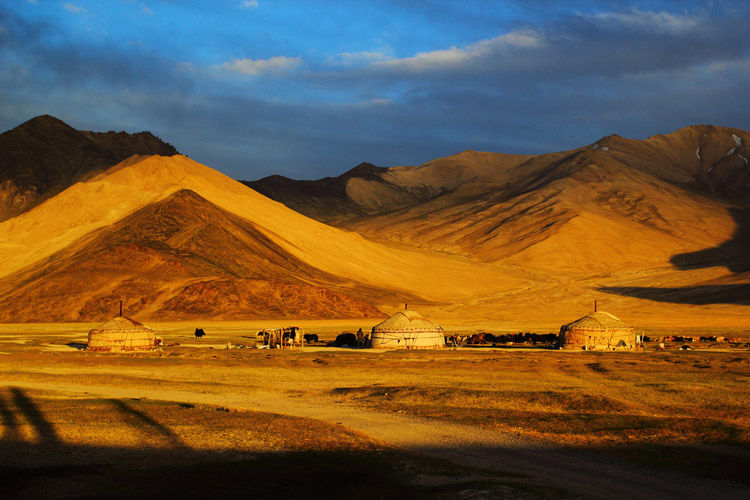 RR: In your estimation and experience, will Kazakhstan ever become a popular destination for adventure travelers?
JB: That's quite a hard question to answer; Kazakhstan is becoming quite an affluent country and the cities of Astana and Almaty are beautiful and very cosmopolitan places to visit and I think more tourists will start going there in the future as the region develops, and especially if the visa situation is relaxed as it has in neighboring Kyrgyzstan. But for adventure travelers I'm not so sure the numbers will grow that much; Kazakhstan is very large and incredibly flat, lacking the incredibly diverse mountains and beautiful environments of its southerly neighbors. Unless you want to suffer on horseback - in the same painting of a landscape over and over again like the film “Groundhog’s Day” - then I'm not sure there's too much of a draw for adventure tourists.
RR: Ever feel the ghost of Genghis Khan hovering over you?
JB: Genghis Khan is more closely linked with Mongolia, rather then Kazakhstan, so I can't really say I felt his spirit hanging over me. But for sure there were times when I imagined what it must have been like being him or one of his riders, galloping across these vast empty plains into the setting sun, you and your horse utterly alone in an expansive sea of grass and sunlight. It truly is amazing the life such nomadic peoples' must have lead.
RR: How did your RailRiders clothes hold up?
JB: The clothes were utterly fantastic. The Versatac Shirts and Pants were the only ones we brought for the expedition, and we wore them day after day giving them an endless beating under the harsh conditions. They were always being rubbed, worn, snagged, trampled, and sun-bleached but they withstood it all and after looked hardly any different from when we had first put them on, just a touch smellier! The shirts were incredibly breathable, keeping the worst of the sun off our ragged frames whilst allowing a lot of ventilation through the many vents that had been cleverly built into them.
RR: After the crossing, what did you do next?
JB: After the crossing we went to Tajikistan to live with a hunter and herdsman named Orozbek for a month, and I also ran 100 miles across a desert in Uzbekistan.