My first fish on a fly 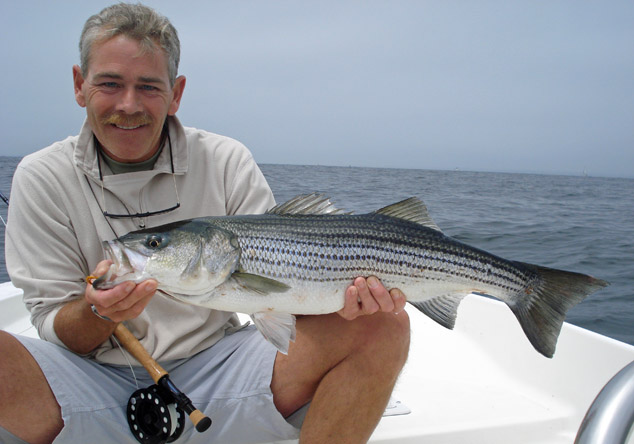 Having grown up fishing (with a spin rod) with friends off the coast of Martha’s Vineyard for blues and stripers I am not a complete newbie to the sport of fishing. With that said, I had not thought about nor fished much in 15 years. About a year ago, when my company RailRiders began selling adventure clothing to fly fishing shops, I became curious as to what this addictive sport was all about, not to mention I figured I should learn to talk the talk. About 6 months ago I was introduced to Jeremy, Joey, Kory, Boz, Dave and many other Flies And Fins crew members . Jeremy and I talked a lot about the sport and I watched tons of videos and looked at hundreds of websites and became intent on learning this mysterious addiction. With advice and help from the Flies And Fins crew, I proceeded to buy a fly rod, fly reel and some flies and went off on a sailing vacation in the Caribbean. I was psyched to give my new toys a try. I quickly learned this is a sport more frustrating than golf and those without patience, such as myself, did not help the cause. Needless to say it blew 24 knots consistently; I saw lots of fish and came home empty handed.

About a month ago my daughter and I decided to give it a go on a lake in NH where we have a summer home. After practicing my fly casting in the yard we headed to the dock to see if anything with fins lived in the lake. After several casts I felt a tiny tug and landed the smallest fish I have ever seen! A perch not much bigger than a Jimmie Dean Sausage and my daughter nabbed a nice little blue gill. It was an amazing thrill for her and a wonderful afternoon catching weenie fish that were not much bigger than the fly.

The addiction set in and I needed a much bigger fix. Not to mention, I wanted to fly fish with someone who could teach me some of the basic fundamentals. I called Jeremy to ask if he could find time to help a friend out. Yesterday we met in Rhode Island and watched the NOAA radar on my I-phone as violent thunder storms had hit the area the last 24 hours. We saw a break in the weather and headed out on the water. I was wildly nervous that I was going to make a complete fool of myself and come home with a fly embedded in my right ear. Jeremy positioned the boat on the fast side of a rip and told me to strip out 100 feet or so of line and let the flatwing squid fly that Ed tied for us swing into the current, then strip back and swing it again. BANG! A fish hit the fly and I instantly felt a surge of adrenalin and total excitement as I began to work this monster to the boat. We landed and released that fish and several minutes later, BANG! I had my second fish on a fly. It was total elation, yet since I did not really cast the fly, I felt I still had not landed a fish on a fly.

Speaking of "the fly". a big thanks to Ed for tying us the beautiful flatwing squid pattern. As the Tide slackened the fish went quiet. We changed strategies and searched and found pods of fish feeding on the surface. We watched the fish and took notice of the direction they were feeding and then positioned ourselves in a manner that would allow the fish to come to us. When we patterned the fish and tide correctly, the motor would be off and the fish would work their way within casting range of the boat. The Moment had come, I was going to stand up on the bow of this horrifically rocking little boat and proceed to attempt to cast a fly to these fish while maintaining my balance at the same time. Wedging my hip against the little wheel pedestal, I stood completely shaking with fear that I was going to pierce Jeremy standing behind me and end up in the drink. The first cast landed about 10 feet from the boat and the pod of fish had disappeared quickly. We found the next group of victims and I did a little better with the cast but still was not quick enough and accurate enough. I was drenched with sweat as I struggled to stay upright, and listen to Jeremy’s suggestions. Jeremy said “John, calmly cast off the starboard side.” There was a nice group of stripers feeding about 30 feet from the boat. I became obsessed and found myself in the zone, I false casted several times and aimed directly at the pod of fish. The fly landed directly in the middle and I let it sink for a second or two. As calmly as possible, I began to strip the fly. 1, 2, 3, 4-BANG I had one! I actually had made a cast and tricked a fish with a fly and my fly rod! I think my heart was pumping a million beats per minute. I screamed with excitement and tried to focus on landing the beautiful creature of the sea. If it had gotten away, I would have been terribly upset. Back when I was looking at all the different websites I could not understand why there were millions of pictures of guys holding fish. Now, I HAD to have a picture of this fish and I now understood completely.

I have not had a day of exhilaration like that in a long time. I felt like I had conquered Everest. As we motored back to the boat ramp, the sun came out and the beautiful colors of the ocean and coastline shone with all its beauty. It had been an epic day, I was completely addicted. Thank you Jeremy for this experience, I look forward to many more to come – want to go fishing? - John d'Arbeloff, RailRiders Adventure Clothing.