Paddling the Gulf of Mexico
Interview with Larry Koenig

On Feb. 9, 2003, two very inspired paddlers, Arthur Hebert, a construction supervisor, and Larry Koenig, an emergency room physician, both of Baton Rouge, Louisiana, embarked upon a six-month, 3,700-mile journey to circumnavigate the Gulf of Mexico. But two months into the watery slugfest, as they battled horrendous headwinds, big breakers, and huge swells, the determined duo rethought their Poseidon priorities. "We were about halfway down the Mexican coast and we had been battling head winds almost since we left, so we were already behind schedule," Koenig said in an interview with the New Orleans Picayune. "On many, many days we would average maybe 1.5 miles per hour. That's how hard the head winds were. When we could see the shoreline we could see we were hardly holding our own, working like slaves all day for very little return. And we started stopping in these little {fishing} villages and meeting these wonderful people, seeing this world very few people would ever be able to experience. It was obvious the only way we could keep that schedule was to paddle 18 or 20 hours a day, spending every waking hour out there on the water, like working out in a gym.  And, if we did that, we would just go right past all these experiences. It just seemed to me that maybe the real adventure was on shore." 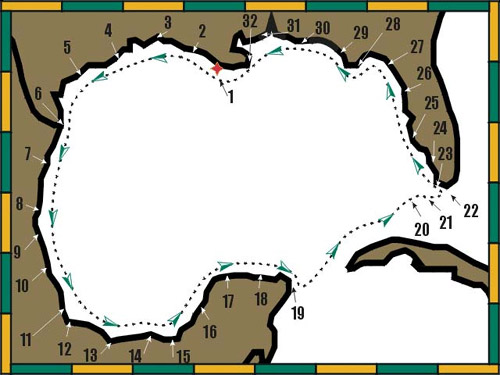 And so the paddling pair decided to break the expedition into segments, ending Section I at Isla Mujeres on the tip of the Yucatan Peninsula on June 27. By then, they had traveled 2,200 nautical miles; each had lost about 30 pounds. They will some day paddle the rest of the route, from the Florida Keys back to Grand Isle. The Gulf, they reasoned, is their ‘backyard pond,' and they still want to explore it personally, mile by mile. Their trip had plenty of support and volunteer help along the way, including sponsorship from the Louisiana governor's office. They also were official ambassadors for America's Wetland, a project to bring attention to Louisiana's coastal erosion problem.
"It was stunning scenery, and totally unexpected," Hebert also said in the Picayune interview. "There were huge caves on the Gulf, and we would paddle into them and there would be thousands of bats coming out. At one point, there were these cliffs that went 150 to 200 feet tall right on the water, and we must have paddled along them for 25 miles." They also stroked past bright red crabs and iguanas among the mangrove roots, large schools of swimming rays, dolphins at the river mouths, parrots and other exotic tropical birds, and thousands of flamingos, pelicans and magnificent frigate birds
So what prompted this amazing trip?
"Arthur and I had paddled together along the entire Louisiana Gulf Coast in a series of separate three-to-five day trips back in 1994 and 1995," Koenig told RailRiders. "We started by imagining the most bodacious local kayak trip we could figure. Arthur had paddled previously, solo, around Lake Ponchartrain and made a trip from Florida to New Orleans. I have paddled the Grand Canyon, a host of western white water rivers and some jungle rivers in Chiapas, Mexico.
"We had both become sea kayak coaches with the American Canoe Association and I with the British Canoe Union in order to learn as much as we could about safety and technique. We chose the Nigel Dennis Kayaks Greenlander Pro for its speed and for an adaptation that would allow two boats to be connected with cross bars into a catamaran-like arrangement that would permit us to stay together (and for one of us to rest intermittently) during the planned crossing from Mexico to Florida. 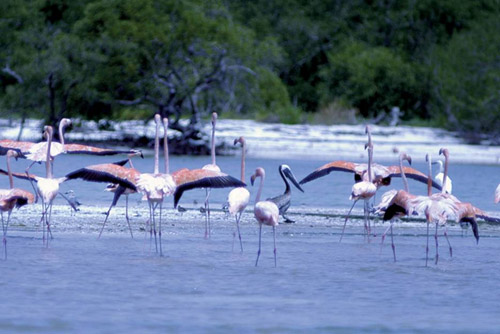 And yes, RailRiders clothing toured the Gulf with them. "RailRiders held up beautifully," says Koenig. "As soon as it was warm enough to take off my paddle jacket, RailRiders Adventure Top became the only shirt I wore for months at a time. I would wash it off in the Gulf and put it right back on. Its simplicity, toughness, quick drying, sunblocking capacity and good looks made it the best shirt I could imagine. I would wear it in towns, We both wore RailRiders Weatherpants during the first month (of wintertime temperatures) and later only when when we needed the sun protection they provided."