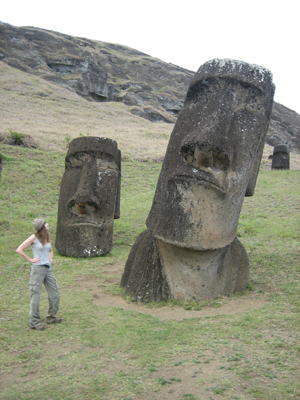 Easter Island (Rapa Nui) was the dream trip of a lifetime. I have wanted to visit Easter Island since I was seven-years old and saw my first television show about the island (I think it might have been a National Geographic special). At that time the only means to reach the island, 2,200 miles west of Chile in the Pacific, was by ship, and the cost and time involved was huge. I just thought that I would never have a chance to actually go there, but I wanted to very badly. I dreamed about it for years. When my husband and I decided to visit Machu Picchu in Peru, I called to book the trip. I told the travel agent that I was very excited, and the only thing that could have made it perfect would be if I could also include Easter Island, and they told me that it would be very easy if I were already in Peru. I got off the phone, looked my husband in the eye and said, "If you love me..."

Easter Island is known for its large statues (called moai), which are incredibly moving and powerful to behold. I especially loved the abandoned quarry at the dormant volcano Rano Raraku. This spot has the highest concentration of moai (nearly 1000). Many are abandoned in some stage of completion, and have been swallowed by elements and time. When you see a moai with just the top of its head sticking up from the ground, it is amazing to realize that 30 to 40 feet is hidden beneath the ground. 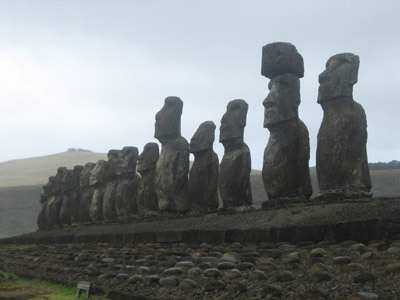 The quarry is especially magical at sunset, when no one else is around. In the evening you have the place to yourself, and my husband and I shared the sunset with a herd of about 15 wild horses which had come to bathe in the lake inside the crater. I found these moai much more compelling than those that have been re-erected on the ahu platforms (burial mounds), some with their pukau in place (red stone topknots intended to symbolize hair). Many native Rapa Nuians have red or blonde hair - indicating a Nordic ancestry in combination with the South Pacific/Asain roots.

But those moai, too, are compelling. They stand in rows atop the ahus and they turn their backs to the sea in order to face the island's center, as their creators believed that their island was the 'Navel of the World' (which is the literal translation of their word for the island - Rapa Nui). Only these 'Seven Moai' face the sea - and these seven are believed to represent those who first found the island.

I almost can't describe what this experience meant. I have always had a strong fascination with stone and with the amazing monuments that our ancestors have created throughout history. The idea that people who had to expend tremendous amounts of effort just to stay alive (provide food and shelter for themselves and their families) would spare the time to create things such as stone circles and moai is just incredible. The fact that doing so held such value for them is something that really resonates with me. 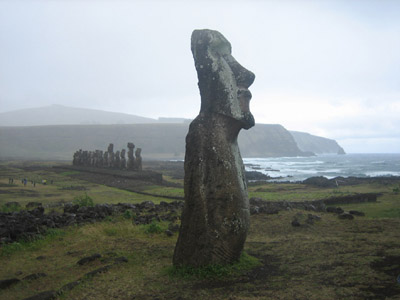 The island's capital, Hanga Roa, is a very small town, really not more than two main streets and a couple of cross streets, but there are many restaurants and the seafood options are excellent. The beef is good as well, but as a non-seafood eater I didn't have as much fun in that respect as did my husband. Meals are pretty simple (there are no 'fine dining' options that we saw, but are great fare. Plus, the island is still a small community with some fun, quirky traditions. One night we had a great meal and were served salsa and a crispy, puffy, almost pastry-like chip (they called it an empanada) while we waited. We really enjoyed it and when we stopped back at the same restaurant a few nights later we asked for it and were told "we only make those when it rains. They are a rainy day food." When dining out remember to bring plenty of cash because some restaurants won't take credit cards and there is only one ATM (the Banc-o-mat kiosk) on the island, and it is not always reliable. Also, remember to add the tip before they take your card or you won't be able to afterwards. The wait people are often also the cook and are very hardworking and friendly, and they don't seem bothered by a lack of tip, but we always made sure to go back the next day with cash when we forgot.

The residents of Hanga Roa are predominantly Rapa Nui, with some inhabitants from other countries. It is illegal for anyone who is not of proven Rapa Nui descent to own land or a home on the island, so this limits those who might otherwise want to put down roots. The locals are friendly, but not overly demonstrative, so at first you may think that you are being stared at or that the islanders are unwelcoming. This is not the case. The island is so small and insular that those who live there greatly welcome the novelty of visitors; they are grateful for the effect that tourism has had on their community. Because so few tourists visit Easter Island, you keep running into the same 20 visitors over and over.

We met many wonderful locals on the island, but one in particular stands out. Rapa Nuians are renowned for their carving skills, especially in wood, but recently it has been more productive to carve moai and pukau replicas from the lava stone that is everywhere on the island. (Make sure to buy plenty of these. They are a wonderful reminder once you get home and your friends and family will love them). Traditionally, only men would carve or work stone on the island, but one woman has now become the first woman to shape the stones as well. We met her at the local artisan co-op, and she talked to us about finding the right stones and spending hours to release the shape within it. She was very passionate about her craft, and we really enjoyed the chance to meet her.

Our lodging (and all the lodging on the island that we could see) was simple and clean, but not very fancy. Every hotel was within walking distance of town, but one was a good ways out on the coast by the airport, and for many people this would require a car. Otherwise, you don't need a car as the town is small and the best way to see the sites is to join one of the tours. I recommend that you take the full day tour first as it visits Rana Raraku (the volcanic quarry) and the 15 moai, which I felt were the most compelling. After you've taken some of the formal tours and soaked up some history, rent a quad, dirt bike, or car so you can spend more time at the places you enjoyed the most. The quarry, especially, is a fantastic spot to have a picnic and just take in the amazing ambience of the moai. You will want to spend so much more time than just a tour allows, and going back on your own gives you that time as well as plenty of solitude in which to enjoy it.

To get to Easter Island after our Machu Picchu trek, we flew from Lima to Santiago, Chile, and from there caught a Lan Chile flight to Easter Island. (If you ask for a window seat on the right side of the plane you will get a nice view of moai as you come in on the descent). One interesting aspect of the trip is that Easter Island has almost no insects. To protect the environment, the flight attendants go through the cabin spraying some kind of anti-bacterial anti-bug spray. It smells a bit weird, but fades very quickly and is supposed to be harmless.

Because United lost my luggage on the trip to Peru (it has never been recovered), I lost all my RailRiders clothing-- and they were very much missed. The airline kept telling me that they were on the verge of getting me my luggage, so I didn't buy anything while still in a big enough city (Lima) to do so. But once you are in the small towns of Peru about all you can buy is anything made from alpaca fur and souvenir T-shirts. Easter Island is even worse, since everything on the island needs to be flown in from Chile. I managed to find a too small yellow bikini, but since there were no flip flops available, I had to wear the bikini around town with my hiking boots. I got some looks!

So, although I am not gifted enough with words to accurately explain how I felt at seeing the moai on, Easter Island, let me at least try by saying I was awed, amazed, humbled, thrilled, and deeply happy. I could not stop smiling. This experience was truly once in a lifetime. To have longed to see a place for my entire life, and then to finally be there and discover it is actually more than you had imagined and dreamed - that is a very precious thing.

Margaret Reddy lives in Colorado with her family and is a senior division manager for a worldwide telecom company. If you have a travel story you'd like to share with RailRiders, let us know at info@railriders.com and be eligible for a free $100 gift certificate.

Known as Rapa Nui in the Rapa Nui language, the island was first visited by Europeans on Easter Sunday in 1722.

Easter Island is a volcanic high island, consisting of three extinct volcanoes, and is one of the world's most isolated inhabited islands. It is located 2,237 miles west of Chile

Researchers give varying dates as to when the statues or moai were created, with estimates ranging across seven centuries, from 1000 to 1700.

Almost all moai were hard-carved out of distinctive, compressed, easily worked volcanic ash.

In the mid-1800s, the island's population had declined due to disease and slave raids, with many locals being forcibly deported to Peru. Today's population is just under 4,000. Sixty percent are Rapanui are descended from an all-time low of 111 inhabitants in 1877. Out of these 111 Rapanui, only 36 had descendants, but all of today's Rapanui claim descent from those 36.