Walking 1,000 Miles Across "The Empty Quarter" Desert in Oman and UAE
Interview with Alastair Humphreys and Leon McCarron 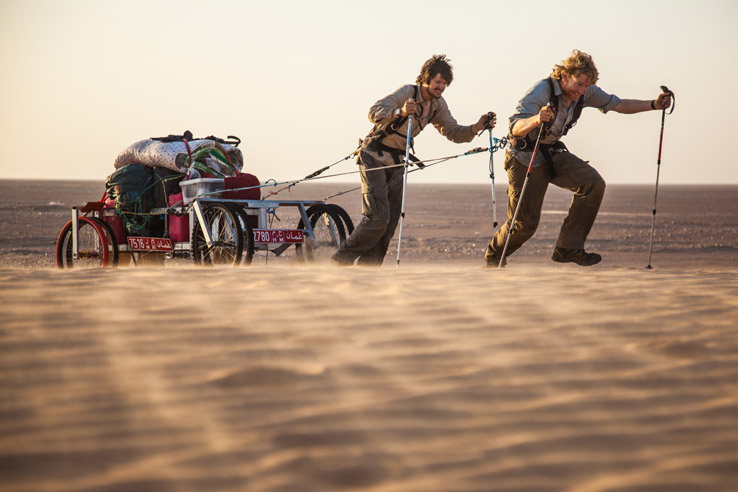 The late great British explorer, Sir Wilfred Thesiger (1910-2003), made two crossings of  the Empty Quarter -- an immense swath of desert in Saudi Arabia -- in the 1940s when it remained one of the last unmapped areas in the world. Thesiger was widely known for his sheer toughness and survival skills. Despite his own stiff-lipped, aristocratic upbringing, he had a deep admiration of the nomadic Bedouin Arabs who knew how to exist in this harsh, unforgiving environment.
Thesiger later wrote an international bestseller, "Arabian Sands," whose passages were surprisingly candid, autobiographical, and filled with poetic awe of the seemingly endless desert. Nearing the completion of one long trek, he wrote, "{The} range {was} as high as, perhaps even higher than the range we had crossed the day before, but here the peaks were steeper and more pronounced, rising in many cases to great pinnacles, down which the flowing ridges swept like draperies. These sands, paler colored than those we had crossed, were very soft, cascading round our feet as the camels struggled up the slopes."
In late 2012, two young adventurers from the U.K, Alastair Humphreys, age 36, and Leon McCarron, age 26, who were inspired by the life and exploits of Thesiger, walked 1,000 miles across the Empty Desert, towing behind them a specially-built cart laden with food, water, and camping supplies. They wore RailRiders VersaTac Light Pants and Madison River Shirt, or rather lived in them, for the entirety of  their 35-day desert walkabout which ended in the shimmering Oz-like city of Dubai.
Their desert march was the latest accomplishment for both men. Humphreys, who spent  four years biking around the world and rowed 3,000 miles across the Atlantic Ocean with three mates, was selected as one of National Geographic’s Adventurers of the Year in 2012. Originally from Northern Ireland, McCarron cycled 14,000 miles from New York to Hong Kong in 2010, and then walked 3,000 miles across China in 2011-2012.
RailRiders: What was it like to literally follow in the footsteps of Sir Wilfred Thesiger? And why did you decide to honor "The Last Great Explorer" this way?
Alastair Humphreys and Leon McCarron: Our plan was never really to follow exactly in his footsteps, but rather to use him as an inspiration for our own desert adventure. I think Wilfred Thesiger would have wholly disapproved of anyone trying to accurately recreate his wanderings! It was wonderful to arrive at some of the desert landmarks that Thesiger mentions in the book, and see them for ourselves. Obviously they have changed so much, but it brought the book to life a little more. Again, it wasn’t really our intention to ‘honor’ Thesiger. We are both big fans of ‘Arabian Sands’ and very much admire Thesiger’s attitude and travels, and felt excited to try and have our own adventure. His journey was incredibly tough – life and death in parts, and regularly left him starving, parched, exhausted and in serious danger of expiring in the desert. In comparison to his, ours really was a breeze – we don’t want to compare ourselves with him too much!
RR: Was it true that Thesiger actually went barefoot?
AH and LM: Thesiger was very keen on becoming completely immersed in the Bedu lifestyle, and so he crossed the desert as they did, which included being barefoot. We decided this was not for us! Thesiger also had camels, which meant he did not walk all day. We both chose a sturdy pair of hiking boots, and a lighter pair of trail trainers (running shoes) to switch around. 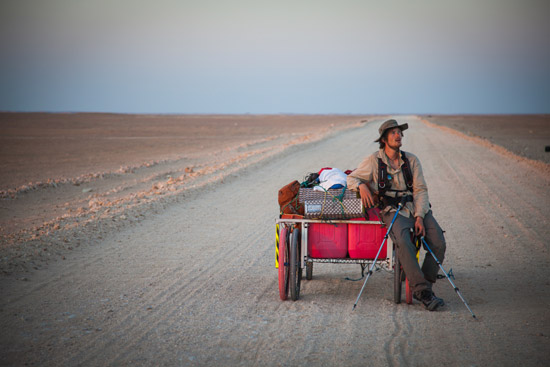 RR: Let's say you were to run into Sir Wilfred in the Great Afterlife's "Empty Quarter," what do you think he would say?
AH and LM: He would call us a pair of pansies! I don’t think he would have been particularly impressed by our journey – we had satellite phones, video cameras, etc – all things he would have thoroughly disapproved of.
RR: Just how empty or uninhabited was the region you crossed?
AH and LM: It varied. There is a highway which runs from Salalah in the south, and skirts the southern edge of the Empty Quarter all the way to Dubai. That has the occasional town every 100 kilometers  or so. Beyond that, into the Sands, there is very little in terms of permanent settlements, but increasing amounts of oil camps scattered around.
RR: Were you surprised by the encroachment of modernity here? Of camels riding in the back of Toyota 4x4s? Thesiger lamented that fact-- the march of civilization-- when he revisited the region several decades after his first two journeys. The area was no longer wild. Massive oil fields had been found. Life had changed for the locals.
AH and LM: A little surprised, but we were quite prepared to find that civilization had encroached into the desert. Oil is such a game changer, and the primary reason for this. Where there’s oil, there’s huge amounts of money, and no desert will get in the way of that! That said, the Empty Quarter is still vast and uninhabited  for thousands of square miles deep in the Sands of Saudi Arabia – but to due visa restriction we could not travel there.
RR: Thesiger survived on meager food and water rations. Was this a problem with you? Going hungry or thirsty?
AH and LM: Not at all! We had  a cart full of food, and at every small settlement could fill up with a nice Indian curry!
RR: How many miles a day did you average?
AH and LM: 25-35
RR: Did you both pull the trailer at the same time, or take turns? How arduous was this?
AH and LM: Generally we pulled it at the same time, but switched positions. It was arduous enough to require two of us pulling, but much easier overall than walking with a pack, as there is less stress on the body. Until you hit deep sand.
RR: How heavy was the cart?
AH and LM: At it's heaviest, it was around 250-300 kilograms when fully loaded with food and water. By the end, when we'd eaten all the food, it was gloriously light.
RR: Describe the supplies you brought.
AH and LM: Thirty  days worth of cheap, calorific food – instant noodles, peanut butter, tins of meat etc.  Ten to twelve days of water, which was refilled at pre-planned points. Camera gear, sleeping bags, camping stove, and a few other smaller bits of general camping gear. 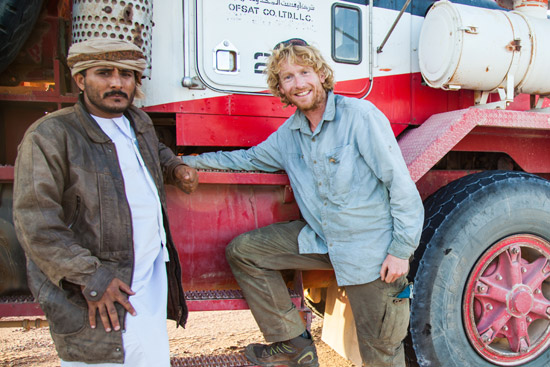 RR: In some of the photos, one notices that you are sleeping on large, floral sleeping pads. They almost appear comical out there in the desert. Please explain.
AH and LM: Early on we very stupidly lost our lightweight, technical camping mats, which blew off the back off the back of the cart on a windy day. For a couple of weeks we slept on a thin, knitted ‘prayer mat’ which we found abandoned in the sand. Then, passing through a small town, we saw the floral mattresses for sale. They were perfect!
RR: How much walking was done along the roads vs. desert sands?   And what was it like traversing the area where the great dunes are located?
AH and LM: We tried to stay in the desert as much as possible, but had to come back to the road occasionally for supplies.  We travelled by track through most of the oilfields and did stretches down busy main roads where our cart drew many incredulous looks. The biggest dunes are impassable by cart, but often they had firmer gravel plains in the gaps between the dunes. As much as possible, we stayed clear of dunes to avoid getting stuck.
RR: What was your interactions with the locals like? Did you spend much time with the Bedouins?
AH and LM: We met quite a few people in the desert – oil workers (of all nationalities), Indian and Pakistani workers in the towns, and some Arabs on the road. We met a few Bedu, but these interactions were limited. One of our best memories is finding a Bedu truck driver had pulled over for us, and brewed some Arabic coffee over a fire.
RR: What was the hardest or most difficult part of the trip?
AH and LM: The heat was the hardest part, particularly from 11am to 4pm.
RR: What did you do during the heat of the day? Walk? Rest?
AH and LM:  Rested. We had a shelter which we could put up to take shade under, or sometimes we just lay with our heads under the cart to get out of the sun!
RR: Where"s the cart now?
AH and LM: We left it in a city called Al Ain, just over the border in the UAE. They have a very impressive museum there dedicated to Wilfred Thesiger, and we donated it to the curators.
RR: Describe the culture shock of arriving in Dubai.
AH and LM: Huge! Quite jarring, but overall not unpleasant. By that stage we were ready to reach the end, and it was great to have such an impressive and ludicrous city as Dubai to be our endpoint.
RR: What do you like most about the desert?
AH and LM: The sunrise and the silence. The dusk and the stars. The ease of camping.
RR: How did the RailRiders clothing hold up?
AH and LM: The RailRiders clothing was great, strong, comfortable and absolutely fantastic. But we’re sorry we got the clothes so dirty. 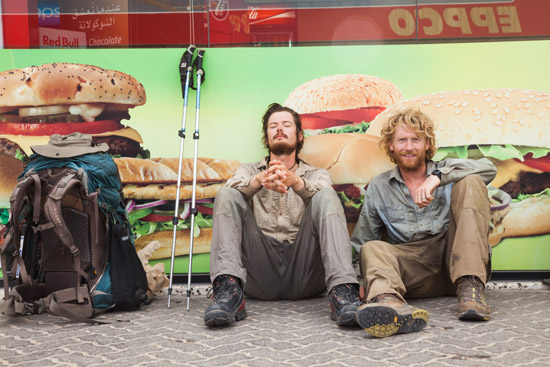